The European Central Bank on Thursday increased interest rates for the first time in 11 years in an attempt to cool rampant inflation in the euro zone. 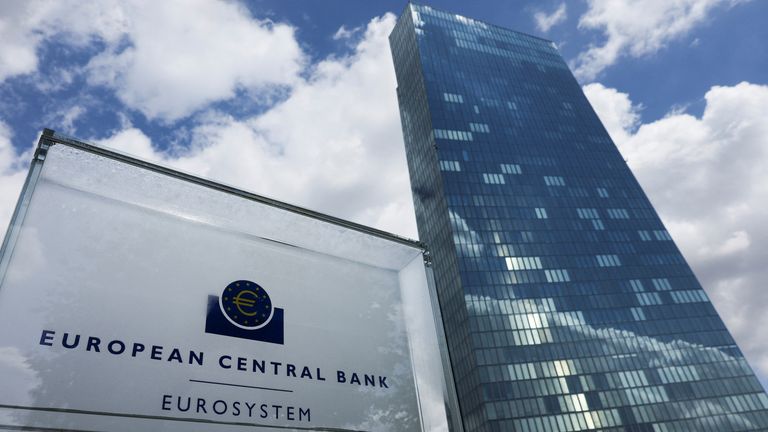 The ECB, the central bank of the 19 nations that share the euro currency, surprised markets by pushing its benchmark rate up by 50 basis points, bringing its deposit rate to zero. Traders had expected a smaller hike of 25 basis points.

“The Governing Council judged that it is appropriate to take a larger first step on its policy rate normalisation path than signalled at its previous meeting,” the ECB said in a statement Thursday.

The Frankfurt, Germany, institution had kept rates at historic lows, in negative territory since 2014, as it dealt with the region’s sovereign debt crisis and the coronavirus pandemic.

The euro rose to a session high on news of the more aggressive rate hike, to trade at $1.0257. The yield on the 10-year Italian bond also jumped on the news, extending gains after reacting to the resignation of Prime Minister Mario Draghi earlier Thursday.

The ECB had previously signaled it would be increasing rates in July and September as consumer prices keep surging, but it was unclear whether it would go as far as bringing rates back to zero. The bank’s deposit rate is now 0%, the main refinancing operations rate is 0.5% and the marginal lending facility is at 0.75%.

Speaking after the decision was announced, ECB President Christine Lagarde described the justification for the larger hike, saying: “Inflation continues to be undesirably high and is expected to remain above our target for some time. The latest data indicate a slowdown in growth, clouding the outlook for the second half of 2022 and beyond.”

Seema Shah, chief strategist at Principal Global Investors, said via email that the ECB is not tightening its policy against a backdrop of strong economic growth “and certainly not accompanied by celebratory smiles.”

“The ECB is hiking into a drastically slowing economy, facing a severe stagflationary [when inflation is high and growth is low] shock that is quite beyond its control, while also facing an Italian political crisis which presents a difficult sovereign risk dilemma,” she said, adding “there is no other developed market Central Bank in a worse position than the ECB.”

Carsten Brzeski, global head of macro at ING Germany, said: “For the first time since 2011, the Bank has hiked interest rates and did so with a bang. Hiking rates by 50 basis points and softening forward guidance shows that the ECB thinks the window for a series of rate hikes is closing quickly.”

A first reading for inflation in June showed a record high of 8.6%. However, some investors are skeptical over the ECB’s actions as they predict a recession later this year. Back in June, ECB forecasts pointed to an inflation rate of 6.8% for the whole of this year, and 3.5% in 2023. In terms of growth, the central bank estimates a GDP rate of 2.1% for this year and the next.

One of the biggest uncertainties going forward is whether Russia will cut supplies of natural gas to Europe completely. Moscow has been accused of weaponizing fossil fuels as the EU slaps tough sanctions on the Kremlin for its unprovoked onslaught in Ukraine.

Natural gas flows have fallen by about 60% since June and a critical pipeline, Nord Stream 1, saw supplies resume Thursday after maintenance — albeit at reduced capacity.

Europe’s economy commissioner, Paolo Gentiloni, has said that a full cutoff in supplies from Moscow, with Europe so dependent on Russia hydrocarbons, could push the euro zone into a recession this year, though this isn’t the EU’s base-case scenario currently.

Lagarde said Thursday that “a prolongation of the war in Ukraine remains a source of significant downside risk to growth, especially if energy supplies from Russia were to be disrupted to such an extent that it led to rationing for firms and households.”

The European Commission, the executive arm of the EU, suggested Wednesday that EU nations should cut their gas consumption by at least 15% until March so they can better cope with fewer supplies from Russia this winter.