Posted on April 8, 2022 by admin in News
Home» News » European markets jittery as France’s right-wing gather steam ahead of elections

Marine Le Pen is closing the gap on Emmanuel Macron in the opinion polls – and investors are getting nervous ahead of this weekend’s first round of voting in the French presidential elections.

For months it has seemed that Mr Macron, who cruised to victory five years ago at the head of his newly-formed La République En Marche movement, was a shoo-in to be re-elected.

But the cost of living crisis in France has increased the desire among some voters for change. Mr Macron, seen as a fresh new face five years ago, is now seen as part of the establishment and, worse still, a president for the rich.

Moreover, support for what have historically been France’s big two political parties – the centre-right Republicans and the centre-left Socialists – has disintegrated, with their traditional voters gravitating to extremist candidates. 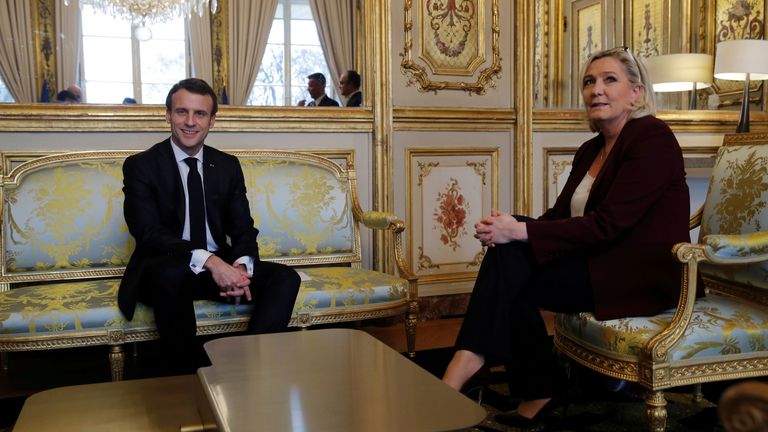 On the left, the beneficiary of the collapse in support for the Socialists – the party of former presidents such as Francois Mitterrand and Francois Hollande – has been Jean-Luc Melenchon, a veteran left-winger.

On the right, meanwhile, the erosion of support for the Republicans – whose former presidents include Jacques Chirac and Nicolas Sarkozy – has aided both Ms Le Pen, who has rebranded her party from the National Front to the National Rally and Eric Zemmour, a rabble-rousing former TV presenter.

The latter looked at one point to be the main right-wing challenger to Mr Macron but his support has faded away sharply in recent weeks due partly to his previous praise for Vladimir Putin.

However, with the top two polling candidates going through, it remains a possibility that Mr Melenchon, who has been likened to the former Labour leader Jeremy Corbyn, could yet pip Ms Le Pen to second place and qualify for the second round run-off.

It now seems that Mr Macron will face either Ms Le Pen or Mr Melenchon in that run-off.

The prospect of a figure from either the far right or the far left occupying the Elysee Palace – and the latest poll has Mr Macron at 51% and Ms Le Pen at 49% in the second round run-off – is starting to cause alarm.

The CAC 40, the main French stock index, is down by nearly 9% since the start of the year and has underperformed most major European stock indices, including those of the UK, Spain, Portugal, Belgium, Greece, Luxembourg, Denmark and Poland.

Only the German, Austrian and Italian markets, courtesy of their dependence on Russian oil and gas, have done worse. The euro has also underperformed on foreign exchange markets.

Meanwhile the yield (which rises as the price falls) of benchmark 10-year French government bonds has risen from 0.194% at the start of the year to 1.26% today. A Le Pen victory would lead to much more volatility.

Mark Dowding, chief investment officer of BlueBay Asset Management, said: “Policymakers in Berlin, Frankfurt, Brussels, Rome and elsewhere across Europe will all be praying that Le Pen does not create a shock.”

“Were this to occur, it is safe to say that we would see renewed EU fragmentation risks, with sovereign spreads under pressure,” Mr Dowding said.

“This could put the European Central Bank in an impossible position seeking to deliver on its mandate of price stability, while simultaneously seeking to prevent a renewed sovereign crisis from engulfing the Eurozone.”

And Vincent Mortier, Group Chief Investment Officer at the French asset management firm Amundi, said: “Marine Le Pen would have a much better chance of winning (against Macron) than Melenchon. If Marine Le Pen wins, a right-wing wide coalition would be likely (only way to get a majority in parliament).”

“But with what programme?,” Mr Mortier added. “Marine Le Pen is a sovereignist candidate, this is her political DNA. Initially, foreign investors would naturally be concerned about the consequences for public finances, foreign policy, social stability or even the cohesion of the EU.

“Investors have so far focused on the consequences of the war in Ukraine and have not yet considered a political changeover in France. This could lead on the one hand to a widening of the French sovereign spread (and other peripheral countries) and, on the other hand, exacerbate the downward pressure on the euro.”

Investors are also starting to think more about what a Le Pen victory would specifically mean for government policy.

Ever the populist, Ms Le Pen is the only one of the main candidates to propose restoring France’s wealth tax, something that not even Mr Melenchon has proposed.

Like Mr Macron, she is also promising to cut inheritance tax and abolish the French television licence. Her other policies are notably left wing and include nationalising France’s motorway network and pushing through a big increase in the national minimum wage.

The biggest contrast between her and Mr Macron concerns one of the latter’s most unpopular policies.

The president, mindful of France’s high government spending and onerous national debt – which is higher as a proportion of GDP than that of peers such as the UK and Germany – wants to raise the statutory retirement age from 62 to 65. Ms Le Pen wants to keep it at 62.

So Ms Le Pen’s policies are seen as significantly less market-friendly than those of the president.

As worrying to investors is the prospect of a new president who is considerably warmer towards Mr Putin.

Even as recently as last week, Ms Le Pen said on French television that the Russian president could be an ally to France in fighting Islamic fundamentalism.

Possible clashes with the EU would also be a danger.

Ms Le Pen has given up the idea of France leaving the EU but has nonetheless promised to change the constitution to give French law primacy over EU law and has promised to break the EU’s single market rules by ending the free movement of people and goods. These would all spark clashes with Brussels and undermine the euro.

As Philippe Gudin, the chief European economist at Barclays, put it in a note to clients this week: “A victory for Le Pen on 24th April would shake up the French political landscape and would have important consequences for both diplomacy and Europe.”

Market participants will, therefore, be watching nervously for this weekend’s first round results.

A strong showing for Ms Le Pen, assuming she qualifies for the second round run-off, could lead to a lot of jitteriness ahead of that poll.